I believe that the U.S. financial markets may be nearing the end of the third stock market bubble in fifteen years. By some measures, equity valuations have reached the most extreme point in history. Market "internals" are starting to break down. Unless one has a 25 year time horizon, now is one of the worst times in history to enter into a traditionally allocated "buy and hold" equity and bond portfolio. 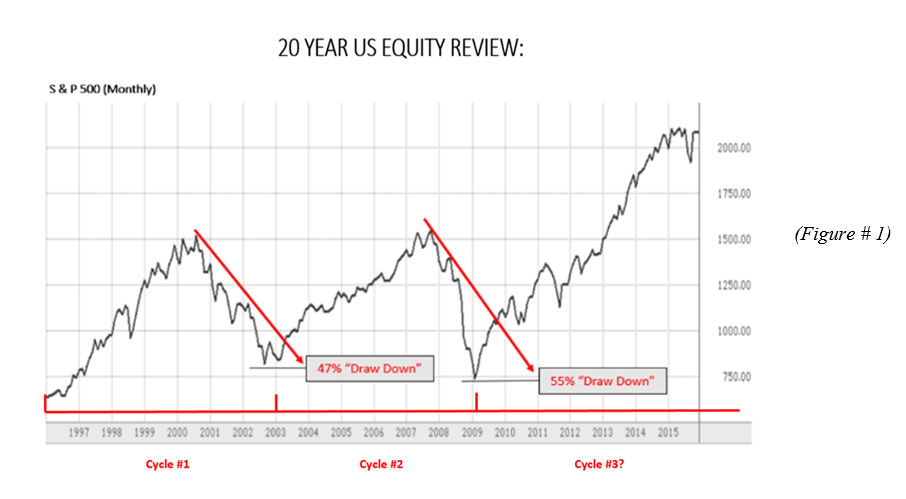 The high in 2000 took a little over a year to complete and coincided with the end of the "dot.com" era. The following 47% decline in U.S. equity indexes (83% in the NASDAQ index) marked the end of such notable and widely traded companies as WorldCom and Enron.

By early 2003, the Federal Reserve had lowered short term interest rates to 1%, sowing the seeds for the housing bubble and a global financial crisis. The U.S. equity markets made highs in July and October of 2007, before falling 55 percent into March of 2009. Notable financial companies such as Lehman Brothers and Merrill Lynch went bankrupt or were acquired; respectively.

The Federal Reserve rushed in to "save the day" and short term interest rates were taken to zero. When that was not enough to get the economy going, experiments and economic voodoo such as "quantitative easing" were implemented in 2011. Several additional rounds of easing followed and continued through October of 2014.

Over 30 central banks from around the world followed the lead of the U.S. Federal Reserve; lowering interest rates to below zero and implementing their own quantitative easing measures. This does not seem to be working, as over half of the world’s largest 93 equity markets were down by over 10% in 2015. This trend has accelerated in the first week of 2016. See (Figure 2) below for 2016 results in some of the larger markets. 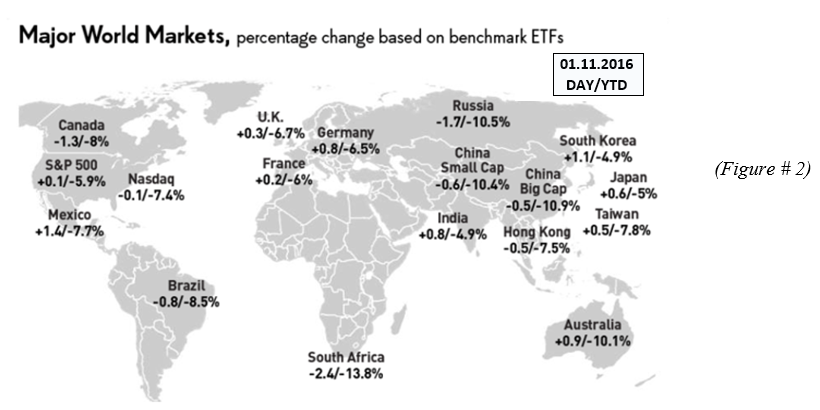 (Figure 3) below from hussmanfunds.com shows 6 different valuation methods that have an 83% to 93% correlation to subsequent 12 year returns. The methods are plotted as a percentage of their "average range". This "average range" is plotted at zero and the vertical axis on the left is the "percent" above average for the particular valuation measure. 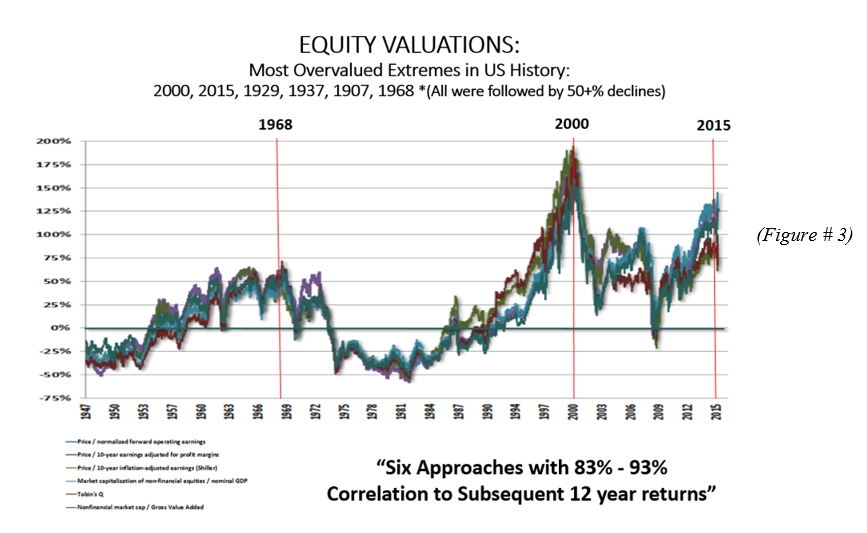 What does the "93% correlation to subsequent 12 year market returns" mean? (Figure 4) titled "Future Return Expectation" from hussmanfunds.com plots in blue the value measure as a percent of its long term average on the left axis (inverted) and then overlays this with the S&P 500 12 year subsequent return (right axis).

As an example, note that in 2000 (peak of the Dotcom bubble) the blue valuation line was suggesting an approximately minus 1 percent return per year for the next twelve years (right axis). You can prove this to yourself by going back to (Figure 1). Observe the level of the S&P 500 in 2000, which was at the 1,500 level.

Note that twelve years later in 2012, the index spent the entire year below the 1,500 level.  If you had purchased an S&P 500 index fund in 2000, you would have sat through two 50% drawdowns and by the end of 2012 you still would not have been back to where you started.

(Figure 4) above is suggesting a zero percent 12 year return for purchases of an S&P 500 index fund today, which is why I started this paper with the statement that now is one of the worst times in history for a traditional “buy and hold” approach to the U.S. equity market.

Markets can remain "overvalued" for long periods of time. We know that an important factor in determining when an "overvalued" market will start a reversion to its mean, i.e. a decline in price, is the participant’s appetite for risk.  This "risk off" attitude can manifest itself in a breakdown of market internals. It can be observed in divergences, such as higher stock index prices while the advance/decline line marches lower.  Divergences in the price of various stock indexes can also be a great heads up of a pending overall decline in equities.

As an example, a narrowing of market breadth demonstrated by the Dow Jones Industrial Average, an index of only 30 large companies, making new highs while broader indexes such as the Russel 2000 lags behind.

This is a process our industry refers to as “the troops not following the generals”.  This is what took place in 2015. (Figure # 5) below 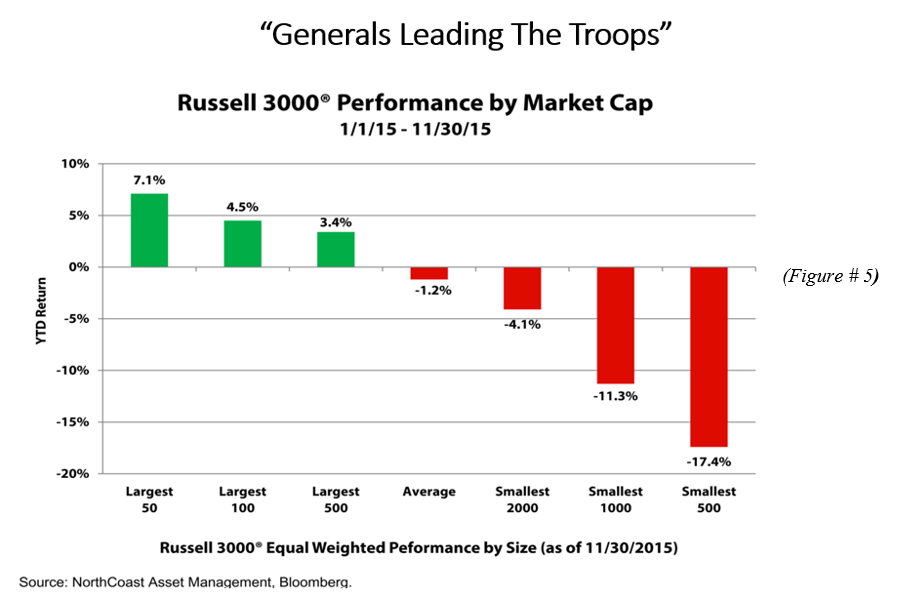 Credit spreads are also particularly helpful in identifying periods of changing risk attitudes. (Figure 6) below shows high yield bonds (JNK), orange line, declining from May 18, 2015 to July 17, 2015. The S&P 500 stock index moved sideways and attempted to make a new high. This "divergence" preceded the sharp decline into August 24, 2015. Again during the highs made by the S&P 500 index on November 03, 2015 and December 01, 2015, the high yield bonds (JNK) declined during this same period setting the stage for the current market sell off. 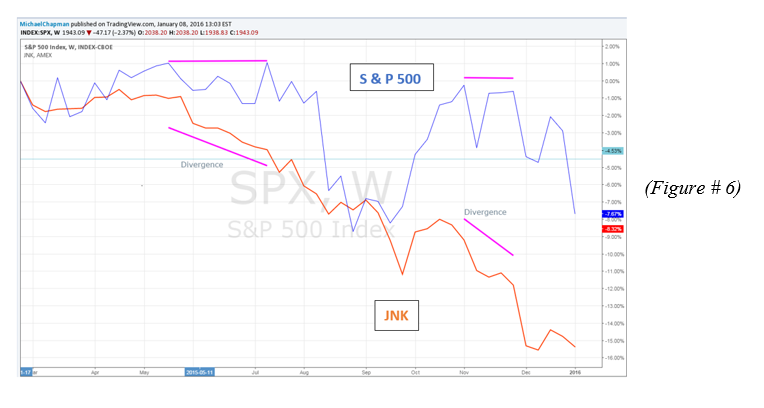 In summary, high valuations coupled with deteriorating market internals suggest that we are in for a difficult year ahead as U.S. equities join the global equity sell off.